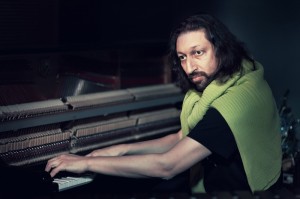 3. Everyone except Lina Allemano

4. Everyone except Lina Allenano and Michael Lynn

Educated both as jazz pianist and contemporary composer, Siberian improviser Roman Stolyar melts various styles and genres in his playing – from ancient polyphony to modern counterpoints and clusters. One of key figures in Russian improvised music, he has collaborated with many outstanding musicians, including Dominic Duval, William Parker, Vinny Golia, Susan Allen,  Weasel Walter, Assif Tsahar, Martin Kuchen, Carl Bergstroem-Nielsen, and many others. His improvisational workshops have garnered him an international reputation, and have led to many invitations to create and implement workshops for organizations and universities around the world, including the University of Michigan, Mannes College, the California Institute of the Arts, Chateu d’Oex Music School in Switzerland, and the Versailles Conservatory. He is an author on the first Russian book on teaching free improvisation – “Modern Improvisation: A Practical Guide for Piano”.