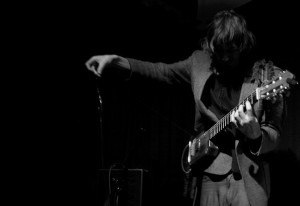 Set 1 – Audiopollination 48.1 from Arraymusic on Vimeo.

Misha Marks (NZ, 1983) was born in Wellington, New Zealand and grew up near the dairy farming town of Karamea, on the West Coast of the South Island. He started playing guitar when he was six years old and later studied jazz and classical guitar at Massey Crematorium of Music in Wellington for two years before abandoning academic studies. Outside of school walls he became involved in the creative music scene of Wellington, based around the adventurous music venue Happy, where he played regularly with local and visiting improvisers, worked at the bar and was the cleaner. After spending time living in Barcelona, Vienna and London, he moved to Mexico City with the idea of staying for about six months, which has since become eight years. He plays guitar, baritone horn, accordion and latarra (a homemade electric guitar made out of an old metallic first-aid box), in both conventional and unconventional ways. He is active in diverse scenes throughout Mexico City playing numerous projects, such as Generación Espontánea, Carlos Marks, Nabuzenko, Partido Fundamentalista del Sonido, Teoqualo, Lágrimas del Cíclope Llorón, Héroes del Destierro, Tr¿oGlodytas and plays regularly with brass bands from the Sierra Norte of Oaxaca.