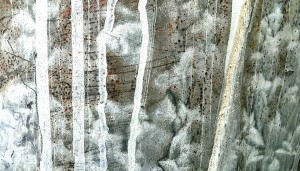 artwork for audiopollination 31.3 by Jamie Thompson

event art by Jamie Thompson
Audiopollination #31.3 is a co-presentation with AIM Toronto and Circuit.
http://www.aimtoronto.org/
https://canadiancircuitimprovisers.wordpress.com/

Kathryn Ladano is one of Canada’s premiere bass clarinetists. She is a specialist of contemporary music and free improvisation and has performed as a soloist and chamber musician across Canada and abroad. Several works have been composed for her and her ensembles from some of Canada’s most distinguished composers. Kathryn holds a masters degree in bass clarinet performance from the University of Calgary and an Honours Bachelor of Arts degree in music from the University of Waterloo. Her performance instructors have included Stan Climie, Tilly Kooyman and world-renowned bass clarinetist and improviser, Lori Freedman. Kathryn has participated in workshops and masterclasses from world-renowned musicians such as bass clarinetist Harry Sparnaay and legendary improviser and percussionist, Eddie Prévost. Kathryn has studied Electroacoustic Composition with Richard Windeyer and Jazz improvisation with Sundar Viswanathan and has also performed with internationally known musicians and improvisers such as Douglas Ewart, Richard Robeson, Ed Sarath, Billy Satterwhite, Michael Jefry Stevens, and Dong-Won Kim.

To Listen to Kathryn go to: http://kathrynladano.com/?page_id=56