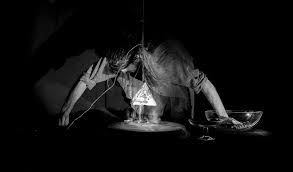 Gil Delindro – Multidisciplinary artist working with a dense fusion of medias. Coming from a background of electroacoustic noise music and independent art production, he has been performing through europe since the age of seventeen, working on open collaborations and performing together with Alto de Pega, SROSH ensemble, Nome and recently in the wide improv echtzeitmusik scene of Berlin.  Delindro explores tensions between ego and nature, time, organic mutations and post digital conflicts, by incorporating organic concrete elements into electronic processed soundscapes. His work has been released and presented in a dynamic variety of forms, from solo and group exhibitions to films and extensive tours. Sound comes as a sculptural research that clashes between chaotic psychedelic textures and obscure relations to Nature. Recently he has collaborated in experimental theater pieces and also in numerous films like Raz Mesinai’s Tunnel Vision, released by tzadik records. He is now post producing an experimental film titled Bruta Gruta, which explores a bizarre world captured during 5 months of isolation in Gerês National Park. He has been in touch with labels such as Sonoscopia,  Giant Fern Records, Marvellous Tone, Blindless films, audition records.  Being also a cultural event producer in both underground and formal places such as Altes Finamzamt(berlin), Toca aqui(porto), Kukulida E.V(Dresden).  One of the youngest and more active artists coming out from Porto experimental scene, having collaborated widely with musicians of different backgrounds such as Gustavo Costa, Yaw Tembe, Jonathan Ulliel Saldanha, Carlos Costa, Harry Taylor, Pedro André.